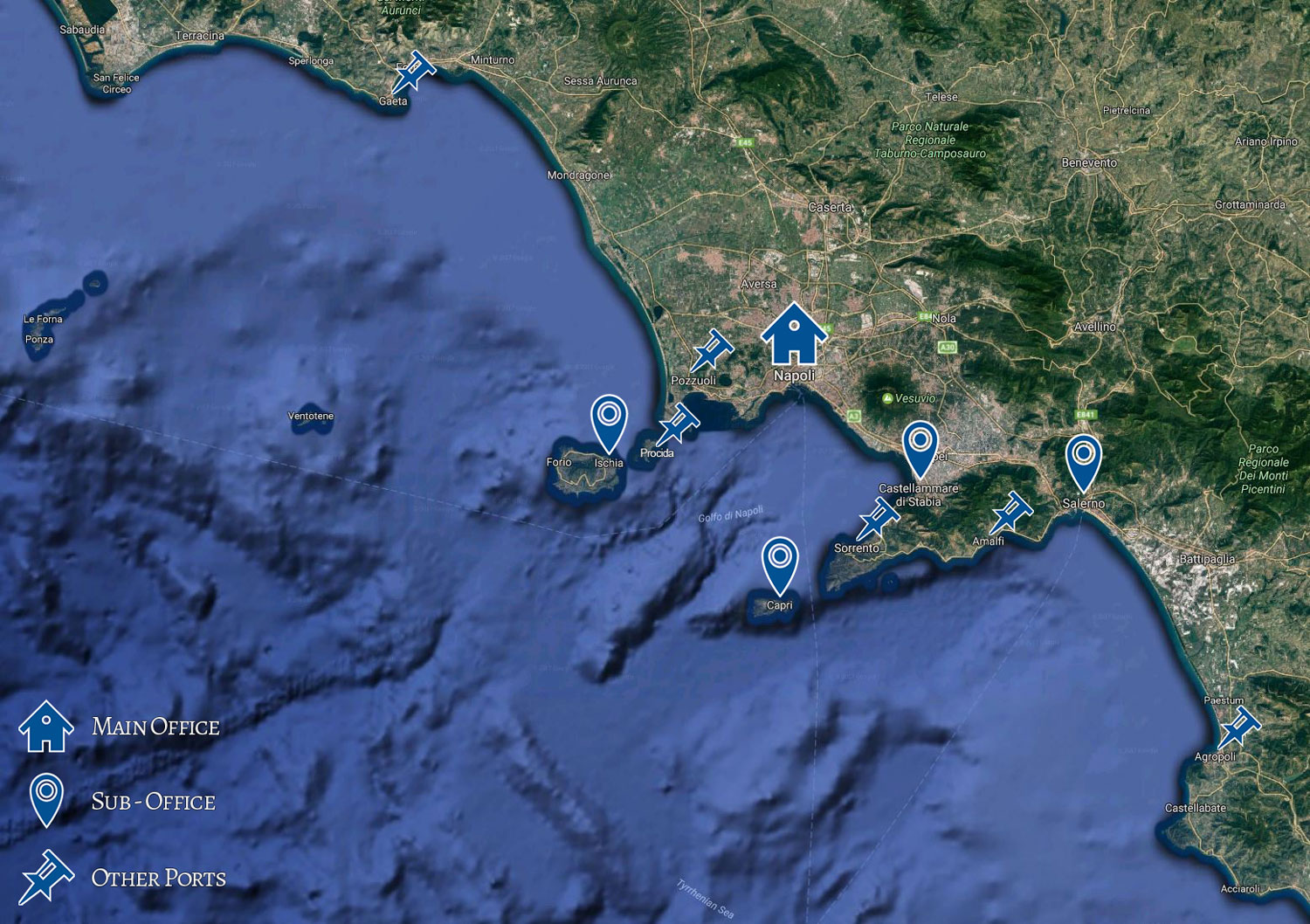 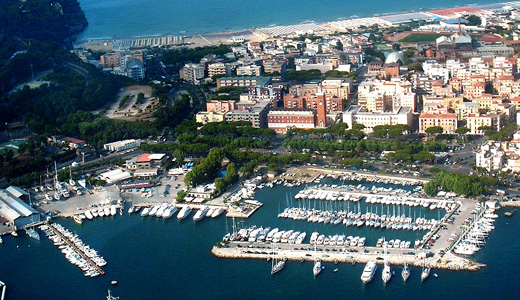 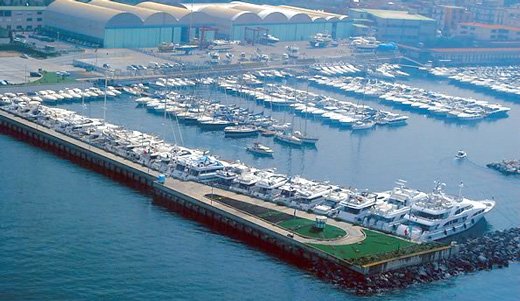 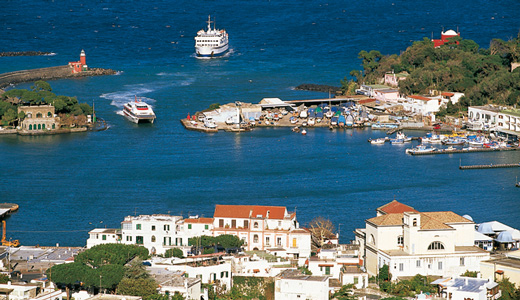 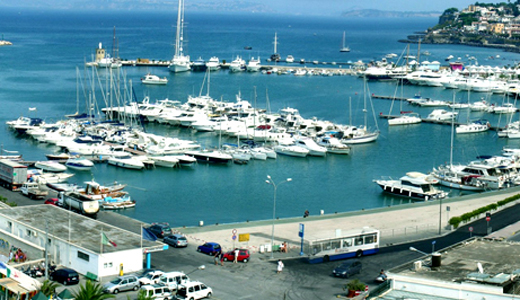 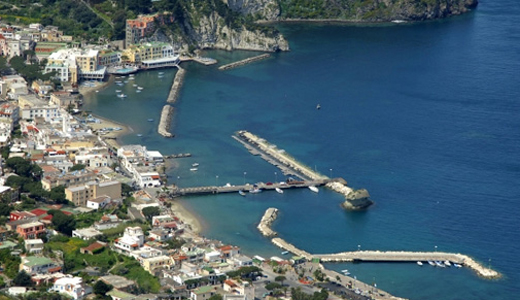 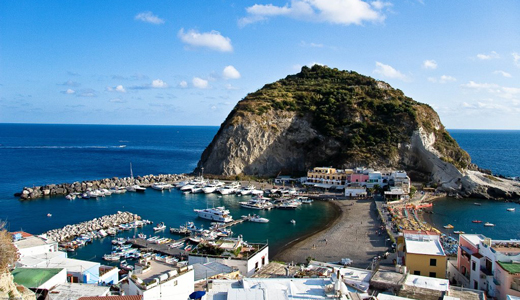 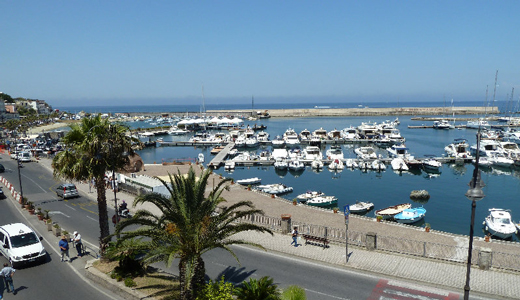 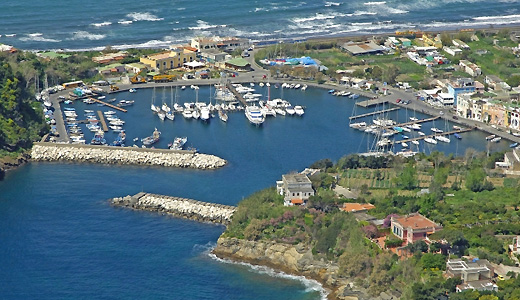 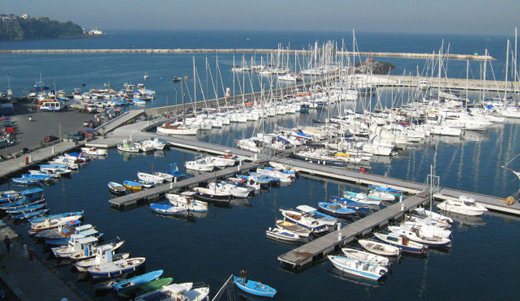 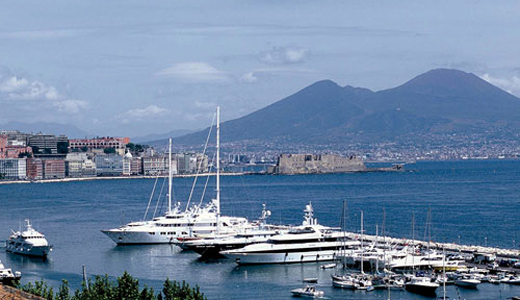 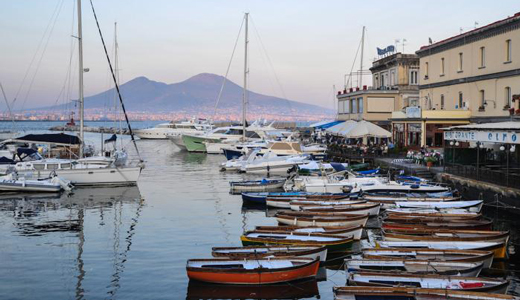 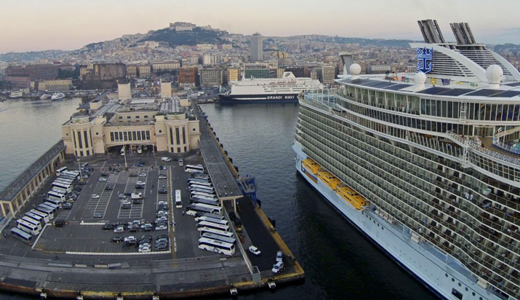 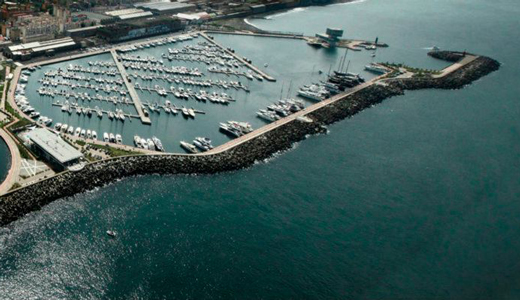 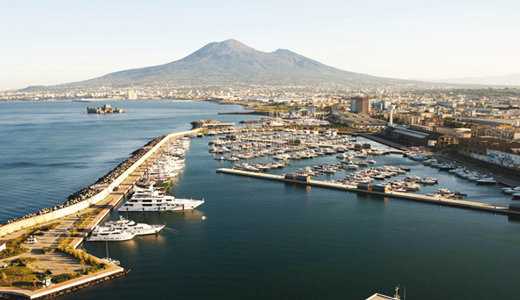 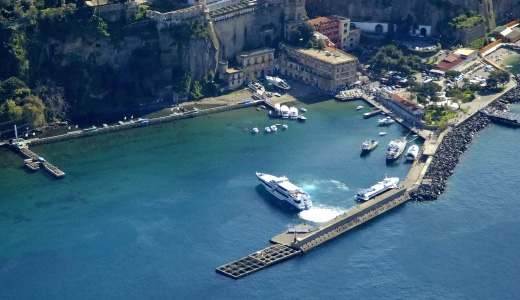 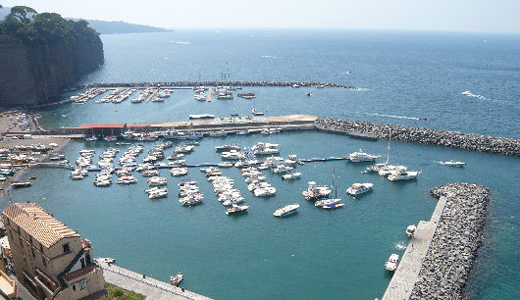 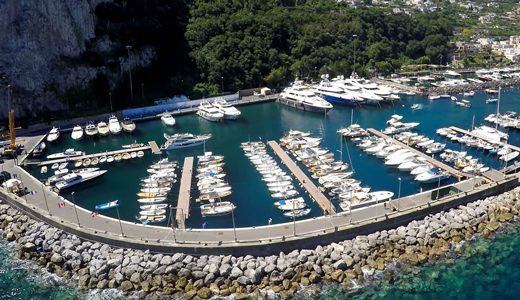 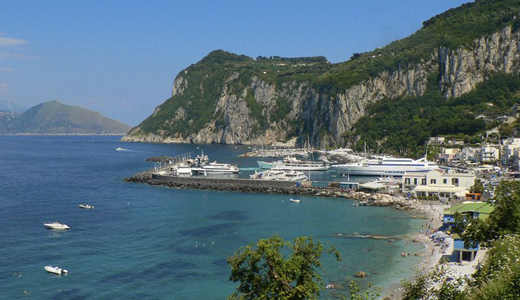 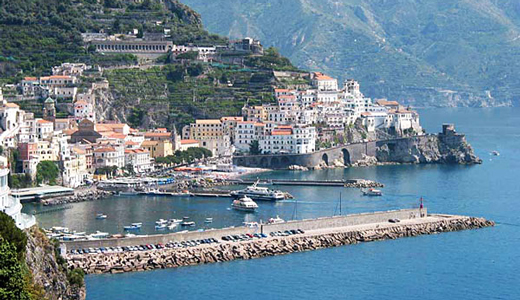 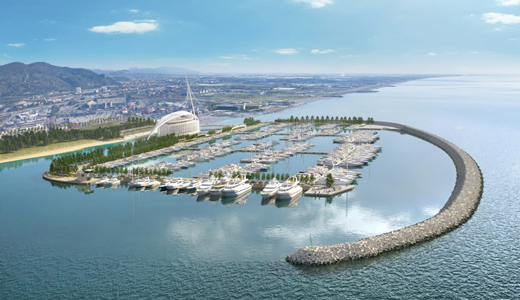 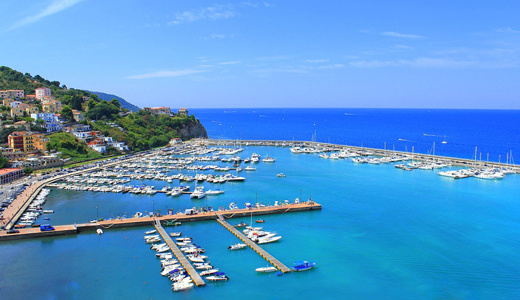 Gaeta is one of the most beautiful cities in the southern Italy Lazio region. Visiting Gaeta is a great way to get a feel for the best of southern Italy – great food, friendly locals, tons of ambiance and a sense of history that ties everything together.

The Pontine Islands are an archipelago in the Tyrrhenian Sea off the west coast of Italy. Ponza is the main one and the most populated together with Ventotene; the other islands, Palmarola, Zannone, Gavi and Santo Stefano, are land and sea conservation areas supervised by the Italian State. Currently, tiny vineyards, wild herbs and flowers, and secluded beaches and grottos make them a popular tourist destination. The presence of underwater caves and reefs annually attract thousands of divers and swimmers.

POZZUOLI AND THE PHLEGRAEN FIELDS

The name, literally burning fields, refers to the highly volcanic nature of this area. It has pretty much all the typical Campanian sights as the more famous side of the bay, including fishing towns, grumbling volcanoes, ancient ruins, and myth-soaked sites — though admittedly on a much smaller scale, and not nearly as spectacular. In Roman times Pozzuoli, Puteoli, was the most important city, with its port. In modern times, it’s also known as the birthplace of Sofia Loren.

Ischia is the largest island in the bay of Naples, considered by many to be the most beautiful. The tourists that visits Ischia eager to enjoy the fruits of the island’s natural volcanic activity, its hot springs, and its volcanic mud. Fourty kilometres of coastline offer ample opportunities for sun-soaked relaxation. Inland, mountainous terrain awaits those who enjoy climbing. The peaceful pleasure of the fertile rolling volcanic hills offer less energetic strollers the chance to gain an advantageous view of the island without running short of breath. The island is home to the Ischia Film Festival, an international cinema competition celebrated in June or July, dedicated to all the works that have promoted the value of the local territory.

Geologically, Procida was created by the eruption of four volcanoes, now dormant and submerged. The island can be visited as a day trip, allowing enough time to see the prettiest views and enjoy a fine harbourside meal, or for a longer stay with time to relax on the beach. Procida’s charm has led to it featuring in a number of films including the classic “Il Postino” and “The Talented Mr Ripley”. It has also been used as a literary setting, notably in “L’Isola di Arturo” (Arturo’s Island).

Naples is one of the oldest continuously inhabited cities in the world and has long been a major cultural centre with a global sphere of influence, particularly during the Renaissance and Enlightenment eras. Naples’ historic city centre is the largest in Europe, enclosing 27 centuries of history. Naples’ 2,800-year-history has left it with a wealth of historical buildings and monuments, from medieval castles to classical ruins. The most prominent forms of architecture visible in present-day Naples are the Medieval, Renaissance and Baroque styles. The historic centre of Naples is listed by UNESCO as a World Heritage Site. Naples has a total of 448 historical churches, making it one of the most Catholic cities in the world in terms of the number of places of worship. The port of Naples is one of the most important in Europe, and has the world’s second-highest level of passenger flow, after the port of Hong Kong. Culinarily, Naples is synonymous with pizza, which originated in the city. Neapolitan music has furthermore been highly influential, credited with the invention of the romantic guitar and the mandolin, as well as notable contributions to opera and folk standards.

Stabiae is the ancient Latin name for Castellammare di Stabia, which lies between Pompeii and Sorrento. Thanks to its magnificent geographical position and its particularly mild climate, it was inhabited since the 7th century B.C.. Stabiae was destroyed by the Vesuvio eruption in A.D. 79.

Sorrento is known for land of colours, Mermaids and orange and lemon groves. It is the home of a prestigious and rich Museum, Correale of Terranova, that contains important testimonies of both the history of the city and of the purest craft tradition of inlaid wood. Sorrento is also the birthplace of the poet Torquato Tasso, author of the Gerusalemme Liberata.

Some of the main features of the island include the following: the Marina Piccola with its little harbour, the Belvedere of Tragara with a high panoramic promenade lined with villas, the limestone crags called sea stacks that project above the sea best known as the Faraglioni, the town of Anacapri, the Blue Grotto and the ruins of the Imperial Roman villas.

Positano is a village mainly in an enclave in the hills leading down to the coast, visited by so many people and yet still has managed to keep it’s tranquility. This small elegant town with it’s peculiar villas laid one onto of another. It is located in a picturesque and protective bay. The town used to be on fishing village but it began to attract large numbers of tourists in the 1950s. The town is frequented by foreigners both in winter and in summer. Positano fashion is famous for its design in all over the world.

Amalfi is a little romantic town of tall white houses built on rocks facing a blue bay on the Gulf of Salerno. As one of Italy’s most beautifully seaside resort, it plays an important role in the tourism for its glorious past. Amalfi is a quiet resort town with a temperate climate and incomparable natural beauties.

Ravello is probably the most elegant of towns on the Amalfi coast and one of the most inspired areas it has hosted a selection of important hosts from Wagner, Greta Garbo, Winston Churchill, the Kennedy family. Just for it mere beauty has appealed for centuries to writers, artists, musicians, travellers…and dreamers! Its scenic beauty makes it a popular tourist destination, and earned it a listing as a UNESCO World Heritage Site in 1996. Every year in the summer months, the “Ravello Festival” takes place.

Salerno is an important cultural center in Campania and Italy and has had a long and eventful history. The city has a rich and varied culture, and the city is divided into three distinct zones: the medieval sector, the 19th century sector and the more densely populated post-war area, with its several apartment blocks. Close to Salerno there is the Territory of Paestum, that touches the most beautiful tracts of the Tirrenian Coast: the sea, the green belts and its fascinating traditions make this place a really interesting touristic destination. The ruins of Paestum are famous for their three ancient Greek temples in the Doric order. Here myth and legend coexist.

Palinuro is part of the Cilento and Vallo di Diano National Park, Unesco World Heritage Site since 1998, is an area of “shrubland” typical of Mediterranean countries. It is popular with tourists, especially in summer, due to the cleanliness of its waters and beaches; and is regularly awarded five stars Blue Flag. The town is also famous for the caves along its coast, which are regularly visited, especially by frogmen.

You need support throughout Italy and Europe?

We have a network of agencies, built in years and years of experience, that guarantees high standards in the whole Mediterranean and Europe.

Plan your charter with us!

Cookies help us to provide our services and make them more efficient and easy to use. By using these services, and surfing our site, you implicitly accept our use of cookies. For more information on what data is contained in the cookies, please see our Cookie Policy page. Ok